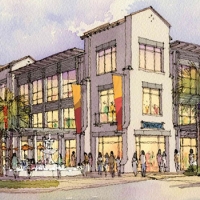 The city of Delray Beach and the developer of the Atlantic Crossing project have settled a $40 million lawsuit, allowing it to finally move forward.

Ohio-based Edwards Cos. accused the city of intentionally stalling the mixed-use project, which would include 82 luxury condos, 261 apartments, 83,000 square feet of office space, and 76,000 square feet of retail and restaurants. Atlantic Crossing would be built on a 9-acre site across Northeast First Street to Atlantic Avenue and from Northeast Sixth Avenue to Veterans Park.

The $200 million development has been in limbo since it was first proposed in 2011. Although most members of the current commission believed that Atlantic Crossing is too big for those two blocks west of Veterans Park, a previous commission approved the project in December 2012. About a year later, the commission gave initial approval for the plan, but had withheld final approval that would be needed to break ground.

Before it moves forward, the project has be approved by three boards, a process expected to take at least two months, according to the Palm Beach Post. If a third-party sues the city over the development, Edwards has the right to pull out of the settlement agreement.