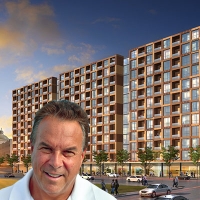 The Downtown Action Committee gave the green light for units sized between 300 square feet and 549 square feet, smaller than the city’s 550-square-foot minimum for apartments, the Palm Beach Post reported. Greene’s project, a 348-unit building, will have one parking space for every two micro apartments. The board’s approval requires a $10 monthly contribution that will go toward the city’s trolley system, and requires parking spaces for bike and car-sharing.

Micro apartments have been generating a lot of buzz, but few developers have yet to move forward on their plans. The smaller units are geared toward millennials who can’t afford larger units in the same location. Reducing parking also encourages the use of public transportation.

Greene plans to build his project on the southeast corner of Banyan Boulevard and Rosemary Avenue. Arquitectonica is designing the 12-story building. Because of the units’ smaller sizes, rent will also be substantially below market, ranging from about $995 to $1,200 per month. There will be a small retail space on the ground floor, which Greene has said he envisions as a café, deli or coffee shop.

Greene owns more than 75 acres of prime land in West Palm Beach with plans to build several new high-rises, thousands of residential units, a hotel, a 30-story office building and a raft of retail space. He has already built a new school.