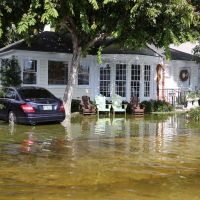 Faced with flooded roadways and rising seas, Fort Lauderdale is considering charging higher fees to keep the public high and dry. On the table is a proposal that would double what city property owners pay in stormwater fees, from $8.5 million a year now to roughly $16.6 million. In recent years, the city has increasingly suffered from flooding during the highest of tides. Water lapped into driveways and rendered neighborhood streets temporary canals. The threat of coastal flooding is only expected to get worse.

“We are the Venice of America,” Feldman said. “My goal is not to be the Atlantis of America.”

A plan laying out the projects and costs is expected to be complete in December, Feldman said. He said the city likely will launch a 30-year bond program, where the debt is repaid with the rising stormwater fees. The fees appear on monthly water bills, and pay for improvements like drainage systems, retention areas where water can collect, sea walls, and other projects to keep water where it belongs. The steep cost for stormwater improvements is in addition to more than $1.4 billion in needed water and sewer work identified recently by a consultant.

If the stormwater rates are changed as proposed, single family homeowners would benefit the most. Currently, they bear a larger burden of costs than do condo owners. The rate change would shift costs so that condo owners, and owners of stores, offices, and government properties pay more. The new rates would be based on how much traffic a property generates — a novel, relatively untested method that city commissioners said they aren’t sure they agree with. The idea was proposed by consultant Burton & Associates, Inc., which conducted a rate study for the city. Commissioners rejected the suggestion last summer but subsequently agreed to reconsider.

The idea, Feldman said, is that most drainage or stormwater work aims to keep roads clear for traffic. A property that generates a lot of traffic, like a supermarket, has more to gain from drainage improvements than one that doesn’t, like a warehouse, he said. Commissioners and the mayor expressed doubts but said they know they’ve got enormous costs, and someone has to pay them.

“I’m just not ready to pull the trigger on this,” Commissioner Bruce Roberts said, suggesting two city advisory boards consider the idea next. “I’d like to have more eyes on it.”

Mayor Jack Seiler said he’d like to consider a rate that’s a mix of traffic and the existing calculation, which is based on how much of a property is impervious, preventing water from draining. Under last year’s rates, a single family homeowner paid $6 a month. That would remain unchanged, under what’s proposed.

The National Oceanic and Atmospheric Administration says sea level has been rising over the past century, and the rate is increasing. According to the Southeast Florida Regional Compact Climate Action Plan, updated in October 2015, sea level will rise 6 to 10 inches by 2030, 14 to 26 inches by 2060 and 31 to 61 inches by 2100.