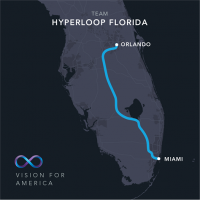 The Hyperloop at first sounds like one of Elon Musk's crackpot ideas. Musk, America's premier huckster polymath, claims his Hyperloop can get travelers the 380 miles from Los Angeles to San Francisco in just 30 minutes by shooting passengers at 780 mph through frictionless pneumatic tubes.

But the idea allegedly isn't that far-fetched anymore: One of the two companies working to create real Hyperloops is now planning lines in five countries. And last week, the company, Hyperloop One, announced it's working with Florida Department of Transportation (FDOT) officials to explore building a Hyperloop between Miami and Orlando.

According to the company, the line would be able to ferry Floridians between the two cities in around 26 minutes. That's less time than it takes to drive from Miami Beach to Coral Gables in standard daytime traffic.

In 2016, the company asked engineering firms and government officials to pitch Hyperloop proposals for their respective states. Last week, Hyperloop One held what was basically a huge pitch meeting and unveiled the 11 best ideas. The company says FDOT helped pitch the idea for a Miami-to-Orlando line.

"The Hyperloop One Global Challenge kicked off in May 2016 as an open call to individuals, universities, companies, and governments to develop comprehensive proposals for deploying Hyperloop One's transport technology in their region," the company announced last week in a news release. "Five of the proposals — including those from Texas, Florida, Colorado, Nevada, and Missouri — involve officials from their state Departments of Transportation."

It's interesting that FDOT officials would be so eager to build a loop between the two Sunshine State cities, because the already-approved Brightline high-speed-rail project will eventually rocket people along the exact same route once construction is completed. (Gov. Rick Scott has extensive ties to the project, which makes FDOT's pitch even more curious.)

That train trip would still likely take around three hours, so it's an understatement to say a 25-minute trip would be an improvement. The Brightline's parent company, All Aboard Florida, has made plans to stock its train stations with glittering hotels and fancy food halls. A Hyperloop would pretty much bankrupt that system.

The Hyperloop could also fundamentally change the way people vacation in both cities: A weeklong visit to Florida could easily include trips to both Miami Beach and Disney World. (Plus, more than a few folks would fly to the state simply to try the Hyperloop.)

Of course, the loop itself remains a pipe dream (pun intended) until the technology is proven to work. Hyperloop One is pitching lines that could run between Chicago and Pittsburgh, Seattle and Portland, and multiple Texas and Colorado towns, among others. (Projects have also been pitched in Europe, India, and the United Arab Emirates.)

The idea is exciting, but the company has yet to offer a ton in the way of demonstrable results — just industry jargon about "disruption" in the transportation industry. In theory, train-like pods would float in a frictionless vacuum, which would make propulsion a breeze.

"Hyperloop One is the only company in the world building an operational commercial Hyperloop system," Rob Lloyd, Hyperloop One's CEO, said in a news release. "This disruptive technology — conceived, developed, and built in the U.S. — will move passengers and cargo faster, cleaner, and more efficiently. It will transform transportation as we know it and create a more connected world."

Last week, the company announced that its 500-meter test tunnel in the Nevada desert — the first Hyperloop tunnel ever created — is ready to begin running.