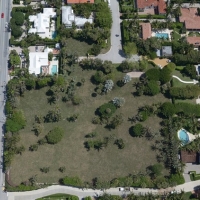 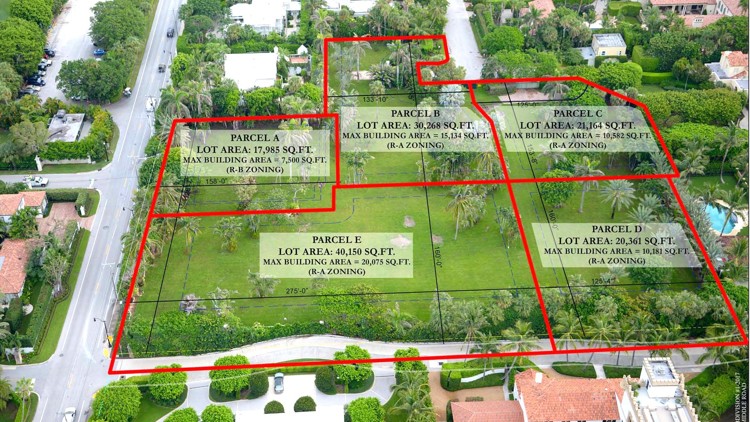 The developer of a new subdivision on prime Estate Section land has announced the prices for the four vacant lots being marketed for sale on the former estate of the late billionaire John W. Kluge.

The remaining lot is already under contract, the Town Council learned earlier this summer before the landlocked subdivision’s plat won approval in July. The 3.4-acre property is owned by a development company controlled by Sir Peter Wood, a seasonal Palm Beacher.

The subdivision is the first major subdivision in the Estate Section in recent memory. The land borders South County Road at the northeast corner of El Bravo Way.

Wood’s lots are being marketed by broker Christian J. Angle of Christian Angle Real Estate. His promotional materials describe the subdivision as a “fantastic ocean-block location” and “just four blocks from Worth Avenue.”

The other three lots are on the north side of the property, nearer the cul-de-sac that terminates Middle Road.

With a buyer waiting in the wings, the fifth lot, Parcel D, faces El Bravo Way and lies east of the largest parcel. It measures 20,361 square feet.

Wood’s original plan for the property called for six lots but he agreed to reduce the number to five when neighbors, represented by an attorney, complained to the Town Council in late June. The residents said five lots were more in keeping with the character of the Estate Section and would have less impact on homes on narrow-and-winding El Bravo Way. As part of the agreement, Hanlon’s clients agreed not to appeal the council’s approval of the subdivision.

The largest lot was created by merging two smaller lots in the developer’s original plan.

Wood has said he might sell some or all of the vacant lots but also might develop homes there himself or with others.

Wood’s development company bought the subdivision land last year for $39 million. It was part of a larger estate assembled in the 1990s by the late Kluge, who before his death in 2010 bequeathed it to Columbia University, which sold it to Wood.

Wood has already sliced off part of the original land he bought. Angle is marketing that oceanfront parcel — at 91 Middle Road with a landmarked 1921 house — at $21.9 million. It is not part of Wood’s subdivision.