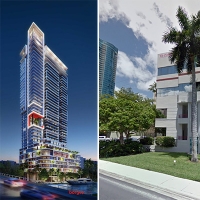 In a bustling downtown with sleek new apartments and condominiums built for well-to-do millennials and empty nesters, Jean Francois Roy is trying to appeal to a different demographic.

The Canadian developer wants to build a 42-story rental along the Fort Lauderdale Riverwalk for seniors — some in need of assisted-living and memory-care services.

Roy insists it would be the perfect use for the prime property at 333 N. New River Drive East, two blocks south of Las Olas Boulevard.

With a projected increase in the population of 65-and-over residents across South Florida, Roy and industry analysts say there’s a big need for senior housing units in Broward County, particularly east of Interstate 95.

Prospective tenants at Riverwalk Residences of Las Olas would be people who have aged out of their existing condos and don’t want to move far, Roy said. Some may be parents of working professionals downtown who want Mom and Dad nearby.

The tower still needs to pass city muster. Mayor Jack Seiler isn’t aware of any residents’ concerns about the proposed use, though he said some question the size and scope of Roy’s project.

In general, though, Seiler thinks there would be no shortage of interest from seniors for a dedicated rental in the city center.

“Why leave paradise at this age?” Seiler said.

About half of the 401-unit building would accommodate active and independent baby boomers, while the other half would be for residents in need of varying degrees of medical care and attention, Roy said. The boomers would come and go using a separate entrance.

Monthly rents would start in the low $4,000s and include food, transportation and activities, Roy said.

The building would house doctors offices, adult daycare and physical therapy services, while the on-site amenities would include restaurants, a rooftop bar, a gourmet market, a full-service spa and six hotel rooms for families of tenants.

What’s more, Roy said, many of the residents likely would forgo driving and walk to nearby shops and restaurants, making the project’s traffic impact minimal. The mayor agrees with that assessment.

“It’s not a nursing home,” Roy said recently on a visit to the site. “It’s not a hospital. It’s a great lifestyle.”

In recent years, the company has focused on boutique condos in Fort Lauderdale, including AquaVita and AquaLuna Las Olas. The 17-story, 35-unit AquaBlu, the largest of Ocean Land’s five complexes, is set to open next year at 920 Intracoastal Drive near the Galleria Mall.

But Roy said his 40-year development background is rooted in senior housing. He built eight facilities in Montreal before relocating to South Florida in 1990.

While the New River Drive site easily could accommodate a traditional condo or apartment building, senior housing makes the most sense there, he said.

From 2010 to 2020, Broward’s projected population of residents ages 65 and over will increase 33 percent to nearly 332,000 people, according to figures from the Bureau of Economic and Business Research at the University of Florida.

Over the same period, Palm Beach County’s senior population will grow by 25 percent to more than 355,000 people, while Miami-Dade County will see a 34 percent increase to nearly 471,000, the data show.

“They are more active, and they want to be better-connected to the city,” said Gibson, principal at Senior Capital Advisors.

While sprawling, plush communities have opened in recent years in Cooper City and West Boca — and more are planned near Lake Worth, Delray Beach and Boca Raton — Gibson said he’s aware of only one new senior housing complex east of I-95 in Broward.

The 106-unit Symphony at the Waterways opened late last year at the Intracoastal Waterway along Oakland Park Boulevard. The Fort Lauderdale-based Stiles real estate firm has proposed an assisted-living facility on East Sunrise Boulevard in a venture with Belmont Village Senior Living of Texas.

Ken Johnson, a real estate professor and economist at Florida Atlantic University, said some critics won’t think senior housing provides the highest and best use of a key downtown parcel.

But Johnson likes the concept, saying it brings together people of all ages and provides a stimulating environment for elderly residents as well as baby boomers transitioning out of the workforce.

“I think it’s a really good idea,” Johnson said. “Quality of life is a lot higher when you can walk a couple of blocks to get a meal or go to the movie or drugstore.”

Roy says he has a contract to buy the existing four-story office building at 333 N. New River Drive East. He’d tear down the building and start construction next year.

Stephen Strum, an owner of a unit at The WaterGarden condo along New River Drive, said he and other residents are concerned that Riverwalk Residences would be only feet away from their building and would block their views.

“You have to have compassion for people who have put their life savings into a condo that will be greatly diminished,” Strum said.

City officials continue to review the plan. While the city wants to promote more pedestrian use of the Riverwalk, it also doesn’t want any one building to overshadow the pastoral waterfront setting, Seiler said.

“How this impacts the Riverwalk is an important question we will be asking,” he said.