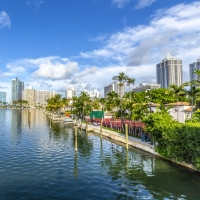 2016 Will Not Turn the Real Estate Market Upside Down

Real estate insiders expect 2016 to be a strong year for South Florida despite slowing sales and price gains in the condo market, according to a survey conducted by Berger Singerman. The law firm polled about 100 top developers, Realtors, investors, lenders and contractors for their take on the new year.

“The overall consensus is that things are going to continue in a similar direction,” said Jeffrey Margolis, a partner at the firm. “2016’s going to look a lot like 2015. So, while everyone is asking, ‘Are we in a bubble? Is it all going to come crashing down?’, the smart money says that’s not the case.”

About 42 percent of respondents said 2016 will be “somewhat better” that 2015. About 37 percent said there be “no change” in the market next year. Only 13 said they expect a “somewhat worse” year.

The reason growth won’t pick up much? Struggling economies in Latin America and Europe are holding back the foreign investment that has fueled South Florida real estate since the recession, particularly the new condo market, an important local economic driver. (Single-family homes are still selling at record pace of tight inventory.)

More than 60 percent of the respondents pegged “global economic conditions and uncertainty” as their top reason for a lack of confidence in the market.

The poll also revealed that developers plan to build more than just condo towers. While 26 percent of respondents said condo development will produce the highest returns in 2016, the hotel and hospitality (21 percent) and retail (20 percent) sectors weren’t far behind.

That’s a change from the previous years, said Berger Singerman partner March Shuster. “We’re definitely seeing more diversity in the market,” Shuster said, “Following the multi-family rebound, people have a feeling that these other areas are going to take off too.”