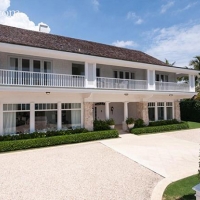 The head of an independent copier company just closed on a Palm Beach home for $18.7 million, property records show.

Kevin and Lisa McGovern sold the 8,722-square-foot mansion at 224 South Ocean Boulevard to Armen A. Manoogian, CEO of United Business Technologies. Kevin McGovern is chairman and CEO of New York and Boca Raton-based McGovern Capital, according to Bloomberg. His firm provides business and investment strategy.

Manoogian, whose nearly four decades of experience includes working for Xerox, paid cash for the six-bedroom home. The waterfront property features a cabana, two pools and a spa, according to the listing. It was built in 1924 and was recently restored with impact windows and doors, Creston lighting, and high-end finishes. The McGoverns paid $3.8 million for the home in 2001.

Paulette and Dana Koch of the Corcoran Group were the listing agents. Joseph Borzillieri, also of Corcoran, represented the buyer, according to Redfin. It was on the market for $22.5 million, which means the house sold for a nearly 17 percent discount.

Manoogian also owns the Palm Beach home at 120 Everglades Avenue, which is listed for sale at $10.45 million and under contract, the Palm Beach Daily News reported.